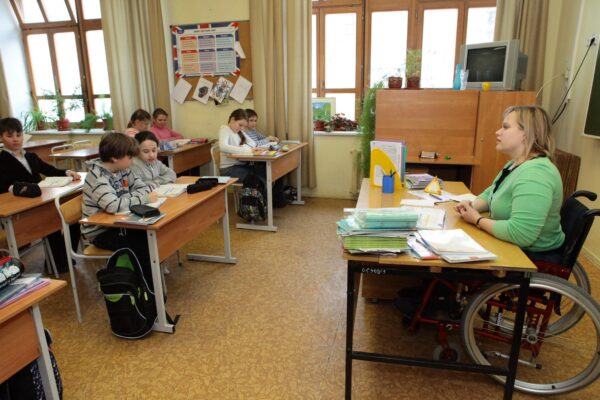 “System of support for children with special educational needs and their parents: achievements and development prospects”

In his message, President Vladimir Putin said: “…Modernization and innovative development is the only way that will allow Russia to become a competitive society of the XXI century, to provide a decent life for all our citizens”.

The National Educational Initiative “Our New School” approved by the President of the Russian Federation stresses that the new school is a school for all. The age peculiarities of schoolchildren Helping Special Needs Children Excel in School, education at the primary, primary and higher levels will be organized in different ways. Any school will ensure successful socialization of children with disabilities, children without parental care, children in difficult life situations.

In this connection, the concept of “children with special educational needs” has been introduced.

The need to establish in our country a system of early comprehensive assistance to children with developmental disabilities (prevention of disabilities, early diagnosis and special assistance to children with developmental disabilities and their families) as a general priority direction of special education is determined by the socio-economic conditions of modern life and their consequences for the population, the policy of the state towards problem children, the possibilities of science and practice in providing such assistance.

The results of domestic and foreign scientific research prove conclusively that early identification and early comprehensive correction of developmental disorders from the first years or even months of a child’s life make it possible to prevent the appearance of further developmental disorders, to correct those already existing, to significantly reduce the degree of children’s social insufficiency, to achieve a higher level of overall development and, subsequently, of education, and to achieve more successful integration into society.

An analysis of the establishment and 30 years of experience in the operation of Western systems of early diagnosis and early comprehensive correction of deviations in children’s development has shown considerable efficiency in their introduction at the State level and the possibility of saving money through correction and rehabilitation at the early stages of a child’s life, since that significantly reduces the cost of the expensive special school system. Demographers and sociologists note that the family suffers the most in today’s Russian society.

The established moral and ethical norms and traditions of the family are being weakened. Tension within the family is growing due to its lack of economic security. All this reduces the family’s educational potential, and if a problem child is born, its role in rehabilitation and socialization becomes insignificant.

Family dysfunction becomes the most important reason for the increased number of emotional deviations and disorders among children and adolescents. This creates significant problems in the development of the child and impedes the process of special correctional and pedagogical assistance. Another serious problem is the deterioration of the health status of children. The proportion of births of healthy newborns in the last seven years fell from 48.3 to 36.5 per cent. Today, up to 80% of newborns are physiologically immature, and about 70% have a diagnosed perinatal lesion of the central nervous system. As a result of urgent measures taken in recent years, health authorities have been able to stabilize child and maternal perinatal (birth) mortality rates.

The percentage of premature infants with a critically low birth weight (between 700 and 1100), which constitute a high-risk group for hearing and visual pathology, cerebral palsy, intellectual disability, blindness deafness and complex developmental disorders, has increased. The scientific prognosis in the field of studying the physical and mental health of children suggests that the efforts of specialists should also focus on helping the most severe children with multiple disabilities. Regional, urban and municipal centres and institutions established on the basis of family-oriented and interdisciplinary approaches to the organization of activities should become the supporting structural element of the state system. Regional centres should be as close to the family as possible and organized taking into account regional economic opportunities, local conditions and traditions.

In the educational system, integration means the possibility of minimally limiting alternatives (i.e. choices) for persons with special educational needs: education in a special (correctional) educational institution or, with equal opportunities, in a general educational institution (preschool, school, etc.). Integration is based on the concept of “normalization”, which is based on the idea that the life and life of people with disabilities should be as close as possible to the conditions and lifestyle of the society in which they live. In the case of children, this means the following.

L. S. Vygotsky also pointed to the need to create a system of education in which a child with disabilities would not be excluded from society children with normal development. He pointed out that, for all its merits, our special school is distinguished by the fact that it closes its pupil – a blind, deaf or mentally retarded child – into a narrow circle of school staff, creates a closed world in which everything is adapted to the defect of the child, all fixes his attention on his defect and does not bring him into real life.

Instead of taking a child out of an isolated world, a special school develops skills that lead to further isolation and strengthen separatism. That is why L. S. Vygotsky believed that the tasks of raising a child with a developmental disability were to integrate him or her into life and to compensate him or her in some other way. And he understood compensation not in the biological but in the social aspect, as he believed that the educator in working with a child with developmental defects, have to deal not so much with biological facts as with their social consequences. He believed that the broadest orientation towards normal children should serve as a starting point for a review of special education. No one denied the need for the latter, but special knowledge and learning had to be subordinated to general education, general education. Thus, L.S. Vygotsky was one of the first who justified the idea of integrated education.

In Russia, there is a transition from the concept of “culture of utility” to the concept of “culture of dignity” in relation to children with disabilities. This is a significant indicator of the maturity of society and the level of its moral and ethical principles. Given the growth of the population of children with disabilities, the task of their integration into society becomes particularly urgent, and educational institutions are beginning to address the problems. Children with disabilities, just as normally developing children, have the right to be accepted as peers, to develop in accordance with their abilities and to acquire the prospect of participation in society.

Introduction of children with disabilities into the human community is the main objective of the whole system of corrective care, the ultimate goal of which is social inclusion aimed at the inclusion of the child in the society.

At present, three approaches are used in Russia to teach children with special educational needs:

In the course of integrated education, children with special needs may be provided with special teaching and learning conditions in accordance with the child’s needs and the findings of the psychological, medical and pedagogical commission. Individual curricula are developed, taking into account the psychophysiological characteristics of children with special needs, and include a study schedule for the person concerned, a study load, and time limits for the children to master the educational programmes and for their certification.

Inclusive education is a learning and upbringing process in which all children, regardless of their physical, mental, intellectual or other characteristics, are included in the general system of education for disabled persons.